“Jellybeans Morning, Noon & Night” is a new children’s book about two brothers’ simple, but brilliant plan to eat jellybeans for breakfast, jellybeans for lunch and jellybeans for dinner! The book is written by Maggie Pajak, illustrated by Marni Deimler and published by Pinwheel Publishing, LLC.

Here is a sneak peek video of the book:

Author Maggie Pajak envisioned the main character, Logan Tinsel-foot – the “Elf Under Cover,” to be like the fun-loving Jack Black but who thought he was Tom Cruise in Mission Impossible. Elf Logan Tinsel-foot also needed to be giggly, silly and a little bit impish.

This was the task that Pinwheel Publishing LLC put out to a group of illustrators. When we put out the call, in just a couple of hours (if that) we received more than 10 bids to work on this project. Knowing that at this rate we could be spending the year reviewing portfolios instead of producing a book, we closed out the bidding early with high hopes that we would find what we were looking for.

We then started reviewing the portfolios and evaluating costs of those who submitted bids. We ended up narrowing the field down to about half of those that originally submitted.

The next step was to send instructions to those few that were remaining, asking them, if they were up to the task, to submit their version of the main character, Elf Logan Tinsel-foot. What would he look like if they were selected to be the illustrator for the book? Once we received all of the images, the hard part began.

we were not sure what style of illustration we were going to end up selecting, especially based on the diversity of the portfolios of those that agreed to create a sketch of the elf. All of the submissions were very different in style and color. Some had texture with impressive backgrounds, others were water colors or sketches. We liked them all in their own way, but it was the publisher’s job to ultimately select the illustrator that we felt brought the main character that we had envisioned to life – whatever the style.

Pinwheel Publishing LLC ended up selecting the first version that we had received (see image above), submitted by Cansandra Ciocian with DeveoMedia Illustration Studio. We felt Cansandra captured the impish and giggly character of Elf Logan Tinsel-foot the way Author Maggie Pajak had imagined he’d be. We look forward to completing this children’s book with her and the team at DeveoMedia.

It was three weeks before Christmas. While Author Maggie Pajak and her family stood bundled on the platform awaiting to board New Hope Pennsylvania’s Polar Express, her son mentioned the phrase, “like an elf under cover” in conversation.

Whatever it was … It was in that moment that “Elf Under Cover” was born! That very same night (at about 3 in the morning), Maggie Pajak wrote this impishly fun Christmas story.

“Elf Under Cover” tells the tale of one of Santa’s elves, Logan Tinsel-foot, just graduating from the North Pole Academy and working his first undercover assignment, case number 200347. This is not your typical assignment. Logan Tinsel-foot is wearing the undercover elf badge that makes him invisible to children. But somehow the child that Logan Tinsel-foot has been assigned to watch CAN SEE HIM!

The mayhem that follows will leave you giggling too! 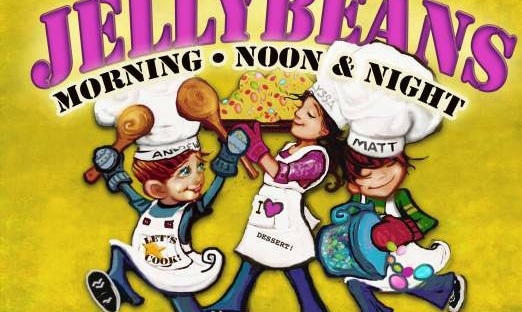 Pinwheel Publishing LLC has just published “Jellybeans Morning, Noon and Night” as an ebook for the iPad. Available beginning December 17th for only $4.99. Click here to download a free preview.

“Jellybeans Morning Noon and Night” is also available in hardback for $16.99 on Amazon.